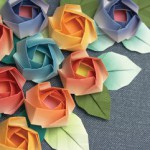 Whether you’re creating flyers, brochures, or direct mail, at some point, you’ll need to fold something. When you do, it’s easy to default to the basic half-fold or letter fold, but customers see those folds all the time. They don’t stand out. Why go vanilla? Spice it up with some unusual folds that spark interest and make people want to reach out and handle the piece.

Here are five basic folds built upon the more classic folds to help spark your creativity:

In the Z-fold fold, the paper is creased into three panels folded in opposite directions so that, from the top edge, it looks like a Z. When opened, the sheet unfolds like a poster. Z-folds are great for displaying information that will be read chronologically or that have images that span the entire width of the sheet.

They are also used for nesting multiple pieces, such as when you want to include a reply envelope inside. Z-folds are also helpful when you need to get an address to fit into the window portion of an envelope. Try them with nested invoices, marketing letters, or fundraising appeals.

Think of the accordion fold as the Z-fold in spades. Commonly used for maps or instructions, this fold uses a series of parallel folds so that the sheet opens like a fan. Because a large number of panels can be folded in, accordion folds enable you to take advantage of larger paper sizes and include more information than a standard finished size. Uses include brochures, maps, and instruction panels.

In the gate fold, two sides of the paper are folded in toward the middle like two doors opening and closing. There are tremendous creative opportunities with this type of fold. You might create a silly greeting card or send an invitation featuring doors opening into a grand ballroom. You might present information like opening a book. The opportunities for creativity in presentation are endless.

This is great for newsletters since it allows a legal-sized sheet to be folded down into #10 envelope size in a user-friendly way.

As they say, there is more than one way to fold a sheet. So mix things up. Use different and interesting folds to improve functionality and encourage people to interact with your pieces. This is a great step toward achieving better ROI.