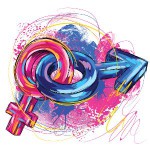 When it comes to designing and developing your print campaigns, do you take the gender of the recipient into account? If not, you should!

Let’s look at some of the differences that you might want to keep in mind when developing your next brochure, postcard, or poster.

The prefrontal cortex is the portion of the brain that regulates emotions. According to Dr. A.K. Pradeep, CEO of Nielsen NeuroFocus, the parts of the brain that handle intuitive reasoning and regulate worry are also larger. As a result, women tend to respond more to messages that are more social, empathetic, and verbal.

What might this look like on the page? A woman might respond marginally to a postcard showing a new style of athletic shoe. But show her an image of another woman wearing the shoe to take a morning run with her husband or a friend, and her brain is more likely to engage.

The corpus callosum has been described as being like an “eight-lane superhighway” connecting the right and left parts of the brain. Because women generally have a larger corpus callosum, they tend to be multi-taskers. Combine this with the focus on social interaction and you can see why, in a study titled, “Men Buy, Women Shop,” researchers at Wharton’s Jay H.

Baker Retailing Initiative and the Verde Group found that women tend to focus less on specific products and more on the shopping experience itself. They also found them more likely to be influenced by sales associates. This means your marketing goals may be achieved simply by getting your female audience into the store.

Men, on the other hand, are more product- and mission-focused. They also tend to respond very strongly to utilitarian aspects of shopping, such as product stocking and the ease of parking.

This means you might want to give men enough information to make a purchase decision before going to the store so they can get in and get out. If they can find the product and check out in less than five minutes, that might be a key selling point!

The hippocampus is the part of the brain that consolidates information from short-term to long-term memory.

This part of the brain is larger in women. As a result, women retain a higher level of nuance in emotional detail. Men, on the other hand, have a larger parietal lobe, which means they tend to be better at spatial perception. That translates to better results with more images and less text. Men also have larger amygdala (more aggression), which means appealing to their natural competitive instinct will get more results.

Print has a unique opportunity to appeal to gender differences because of the tangible, emotional (while also functional) appeal of the medium of ink on paper. So use those benefits, along with knowledge of some of the key gender differences, to make your results soar! 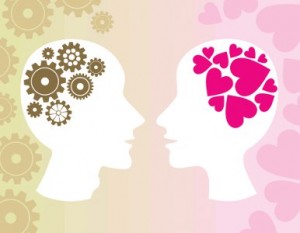